I shouldn't be up blogging. I should be putting my kids to bed. But it's the last of summer vacation so I'll be a bad mommy so I can share more pix with you guys. Because I know you're just dying to see more.

There is one last leg of our time in Boston. I think I left you with our petting farm experience in New Hampster, yes? Oh wait. I checked. When last we left our heroic vacationing family, they had just returned to Boston. The invasion of KimmyJo's condo had begun!

My junior year college roommate is one of the very few people I'm still tight with from that college. Our friendship was a total accident that can still make us laugh to this day. But that's another post entirely.

KimmyJo is brave enough to let us all crash in her two-bedroom condo. In all honesty, it was her cat Iverson who was brave. He is very shy normally but seemed to really enjoy having two exuberant little boys to play with.


Wed Aug 6th
Having just returned to Boston the night before, we did another late morning sleep in. KimmyJo had to head to work early so she tiptoed around the two inflatable mattresses and me on the couch. She left early for her 13+ hr nurse day. 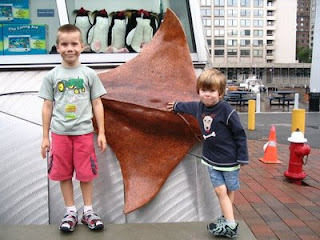 We lounged around with Iverson and watched some TV. I figured the New England Aquarium would be less packed later in the day. I am an idiot. We got there after lunch only to wait a good 40 minutes in line just to get tickets to get IN! I asked the boys to let me just buy tickets for us to all go with KimmyJo the next day. They weren't having it. It was a rather expensive hour-long visit. But in all honesty, that's just about all the aquarium two young boys can handle. 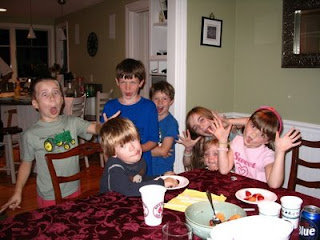 After hemorrhaging money for the tickets, souvenirs and parking, we drove out west of Boston to visit my ex's cousins and their cornucopia of cute kids. They all rock. And one cousin had her first daughter the day before I had Pokemon Boy. I call them "Birth Buddies". They - both being eight - think I'm a dork. It was an awesome cookout and hang session. Their family rocks. I'm glad I can still weasel my way in via the kids. Hee! 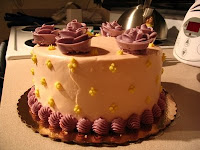 We headed back to KimmyJo's pretty late. She was still wrapping up at the hospital. And, I come to find out, it's her birthday! 13 hour work day or not, we were getting her a CAKE. We stopped off at the local Whole Foods and purchased a small work of art there. 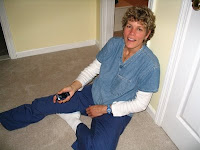 KimmyJo came home to find that Pokemon Boy had made a scavenger hunt for her - searching for little sticky notes with the names of Ben 10 aliens on them. I thought she might be too tired for such an adventure but she loved it. She's a good auntie! Lil'Bro presented her with her penguin magnet from the Aquarium. I presented her with a glass of red wine. It's the best I could do. And let me tell you, that cake ROCKED. KimmyJo told us that she doesn't often celebrate her birthday. So this was the best birthday she had had in a few years. That made us all feel good.

We all stayed up late talking and hanging out. A full and wonderful day.


Thu Aug 7th
KimmyJo took the next few days off. It was so cool to have her with us. We had another sleep-in morning. Iverson was in heaven with this many people hanging out. He would claim my bed (a made up couch) every time I got up. He's so cute, I couldn't displace him.

After dawdling as long as we could, we headed out to meet our friend Sue at the Boston Children's Museum. This is such an awesome place. When we moved to Austin, we couldn't wait to get to their Children's Museum thinking it would rock maybe even more - because, you know, they do everything big down here. Apparently, they don't do children's museums big...at least not in Austin. It was rather disappointing compared to the wonder we were used to in Boston. Come on Texas! Step it UP, people!

Let me tell you about the Ginormous Climby Thing! I have a bunch of pictures of it but they don't do justice to the absolute towering majesty of the thing. It's about three stories high, I think. It's hard to see in the pictures. But each platform is wavy and carpeted. The stuff that looks like cargo netting is that plastic coated cable stuff, all linked together. 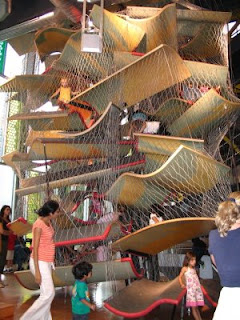 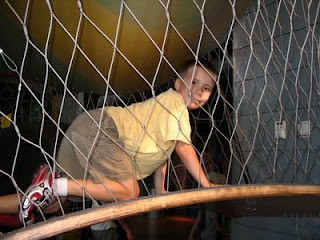 Pokemon Boy went all the way to the top and back down, twice. And it takes a while with that many kids squirming through there. 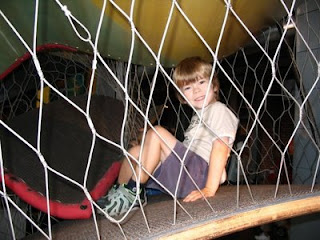 Lil'Bro was just over powered by the bigger kids. He's not aggressive enough to shove his way through. So he made it about my height and then came back down.

But seriously, that Ginormous Climby Thing? I want one in my house. Which means I have to get a bigger house. Dang. I must work on this plan.

Here's a couple more shots from the Children's Museum:
Pokemon Boy in the Construction Zone. 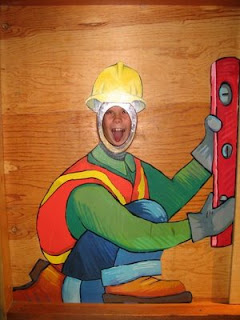 Lil'Bro in the Construction Zone Fri Aug 8th
Another decadent & luxurious late morning awakening. Oh how I miss those. KimmyJo had planned on driving us down to a place called Castle Island to give the boys a dip in the Atlantic Ocean. But alas, the torrential downpours that started about 10 minutes into our car ride derailed those plans. Fortunately for us, the heavens opened as we sat at a red light right next to the Boston Museum of Science. Alrighty then. Another museum it is!

That place is all sorts of crazy huge. Honestly, you could spend one day walking around each wing of the place. We only went to one wing, really. The Blue Wing - the one with the life-sized TRex. Don't worry. It wasn't alive.

We accidentally hit an exhibit of New England native animals in the Green Wing while looking for the food wing. So Trish, I got to see a moose! Granted, it was dead, stuffed and behind glass. But it was a moose none the less!!! My pictures of said moose were blurry. So here are cute shots of my kids hugging the black bear. 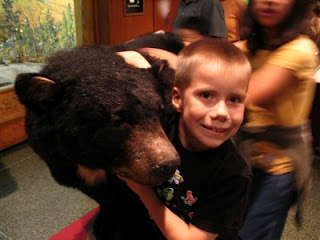 Lil'Bro trying to hide his laughter because he was mad at having to stand by the dead ol' bear. But I got him to laugh. 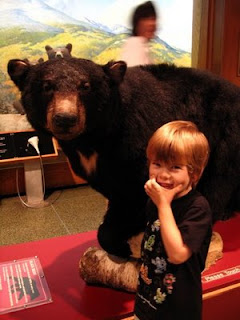 Sat Aug 9th
Time to head home. A sad moment because we're leaving everyone. But all three of us were ready to get back home to Texas. That towering lush greenery every where gets real old. (I kid!) 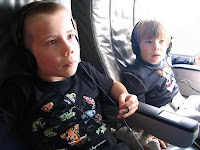 Once again, the boys enjoyed JetBlue's kid drugs (TV). I was a bit TV'd out so I did my Sudoku for most of the trip. Left lots of little eraser shavings on and around my seat. 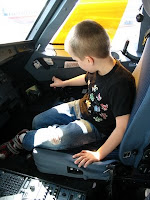 Oh but here's the coolest part of this day! When we were boarding the plane in Boston, Lil' Bro looked in the cockpit and asked, "Is that the driver?" Yup, I replied. That's the driver. "Wow," he remarked. "They have a lot of buttons!" This got a chuckle from the pilot and flight attendant standing there. The flight attendant saw we were in the 4th row and told me to hang back when we get to Austin and they'd have the boys go in to see the cockpit. Sweet! 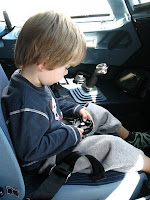 The boys were awesome the whole flight. When we got to Austin, we hung out in our seats while the rest of the place filed out. Then we went forward. I thought they'd just let the boys stand in there and look around. Nope. The pilot put each boy into one of the pilot chairs! He let them push any button they wanted and wiggle the joy sticks! He even let them talk briefly over the intercom. They were in heaven. I was so psyched because I thought they didn't do that any more. So what an awesome capper to our whole vacation! 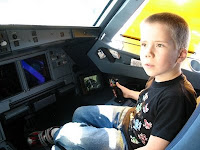 My BigSis and her TallHubby were waiting at baggage claim for us. I had left my car with them for the two weeks. My sister was sad to return it to me - she had been spoiled having her own car for two weeks. But they had it washed (inside and out!) for me. AND filled it with gas!!! I told them I'll have to go away more often! 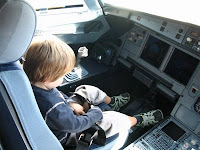 Oh my what a great trip! I kept thinking "this is my fav part," but it just kept getting better. I love that airline pilot. Marvelous.

And that cake looked awesome.

So glad you had a great trip and that you're happy to be back home. It's all good. :)

Thanks for visiting the Aquarium!
I work there and I was happy to come across your post :)

I want cake! Why didn't we think to go to Whole Foods when you were in our part of the world???

Note for next time :)

I am SO jealous of your boys; I have ALWAYS wanted to be invited into the cockpit!

I want that cake. Right now. Is Whole Foods open at 11 p.m.? Maybe I need to show Jason the picture as a not-so-gentle hint for my birthday.

I loved reading all the details of your journey . . sure enjoyed having the Hal man and sweet Hawkins mama here over the weekend!