Lil' Bro has had a nasty little cough for a few weeks.  We live in an area famous for its live music and its allergies.  Before moving here, I had heard of the latter but chalked it up to a large community of hypochondriacs.  Apparently I was wrong.  There is a unusually high concentration of varying allergens in this area that you either acclimate to or suffer with.  Pokemon Boy has acclimated.  I'm hoping Lil' Bro is on his way to the same.

Either way, this go 'round, he is losing the congestion battle in the bronchial region.  And now that there is a fever and general blyecky feeling, off to the doctor we go.

I have no doubt he will eventually rally.  We may have to put off bouncing ourselves silly.  But there WILL be presents opened.  And there WILL be a Batman cake consumed.

And tomorrow, I will have a five year old.  A sweet, adorable, loving five year old.  One that adores his older brother so much that he was willing to order his entire cake in vanilla in stead of chocolate.  When I asked him if he was sure about that, he told the lady at the bakery, "Well, my brother doesn't like chocolate."  And chocolate was pronounced "chock-o-lit."  He will surrender his Burger King crown along with the title of King to his older brother to keep him happy.  If he suggests a game and big brother says no?  He rolls with it and asks, "Well, what do YOU want to play?" and then plays whatever big brother comes up with.

He can be silly with the best of us silly gened people.  He can be as shy as his great grandmother was.  He is rough and tumble but doesn't like to see anyone get hurt.  He is fascinated with how all things are put together or how they work.  This explains his obsession with Transformers as well as documentaries on how the brain works or how fetuses develop.  He will come out of his shy shell at interesting times to sing the entire song of Rudolf for my friend and me at church in the middle of our conversation.  We stopped to listen because we knew we were being treated to a rare treat.  He has a very soft spot for his grandpa (my dad).  He never lets you forget the 2nd person in a couple during conversation.  If you mention one, he'll pipe up to chime in the other name just to make sure they're not forgotten.  He loves kitties.  He's starting to like dogs.  The smaller the better.  Like his older brother, he adores babies.  He has not yet learned to think of girls as "gross" or "the enemy".  He's still small enough to carry.  He still lets me kiss him in public.  He frequently makes me pray to ask God to "stop the bombs, protect the babies, protect the children and protect the mommies and daddies" in war-torn countries.  He doesn't think Christmas decorations are all for his birthday.  And I was so proud when he insisted we needed to put up our tree, not so Santa could put presents under it but "for Jesus' birthday."

I remember being pregnant with him, worrying that I would never be able to love another baby like I loved Pokemon Boy.  Everyone with more than one kid assured me it would happen.  But I knew it was impossible.  Which is just one of the cool things about God.  With him?  All things are possible.  And the way he has given parents the ability to fall so madly in love with more than one kid.  I still find that amazing.

I am seriously the luckiest mom...that lives in my house.  There.  Now you other moms can't yell at me.

Thank you God for giving me such wonderful boys.  Thank you for Lil' Bro's birthday tomorrow.  Thank you thank you THANK you, God. 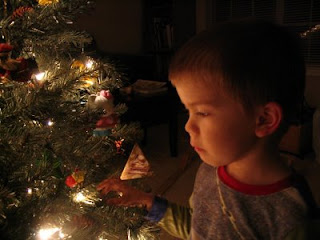 Pokemon Boy near the tree. 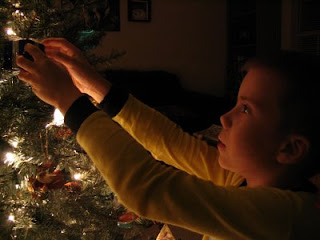 I've an older sister who, to this day, has never asked, "ok, what do YOU want to play?" And so I send an extra hug to Lil Bro on this 5th anniversary of his birth.

Happy birthday to the little one! He sounds like such a sweetie!

Beautiful boys Lynette ~~ the pictures of pokeman boy by the tree to die for!!!

They grow up so so fast...enjoy every minute!!!!

Just checking in to say I hope you had a lovely Christmas!

I just now read this--what a beautiful post!! I hope Lil Bro had a great day.