Oh my FREAKING goodness!! I cannot believe the Sox won the World Series. Now, you need to understand me to know how shocking it is that I care about A) baseball, B) the Red Sox and C) the World Series.

I lived in Boston for 20 some-odd years. During most of this time, I worked in Copley Square (think IN the city) and I lived out by Boston University (think just outside the city). So for most of my adult life, I had to get to and from work by going directly by Fenway Park (think right smack dab in between the two). I either rode the T (subway), a bus (the 57 bus) or rode my bike. No matter what I did, if I wanted to make it home in a normal amount of time, I had to go through Kenmore Square. And that means by Fenway. And for a portion of the year, that means wading through scores of idiotic Red Sox fans.

I have watched the fans from the suburbs or rural areas treat my city as their own personal garbage can or spittoon. I have had my butt grabbed by fans as they drove by me on my bike. I have had beer cans, fast food and crumpled up paper lobbed at me by said fans as I rode by on my bike. I have had to wait for what seemed like forever for a train that had enough room for me to cram myself in between really bad frosted hair and giant beer bellies. I have had to get off a train because of overzealous drunk fans deciding to vomit.

For many MANY years, I hated the Red Sox. Sure, I really hated many of their fans. But I focused my hatred on the Red Sox. And baseball in general. It's a slow annoying game. The game is so slow that the fans have no choice but to drink themselves silly in an attempt to have some fun.

I lived in Boston. I loved Boston. But man, I hated the Red Sox. Not a real popular stance. But I stuck to my guns.

Until 2003. That's when I moved to a suburb of Boston that didn't require a daily trip through drunk stupidville. Then I was actually able to watch the Red Sox without feeling the need to punch one of them in their stupid over-paid heads.

This change of heart had very good timing. Because in 2004, they had their first win since 1918. Honestly, how could you NOT love that? I remember watching that win, standing up in my living room with my hands over my mouth in TOTAL disbelief. And I had to scream very quietly because my relatively new baby was asleep, as was his big 3 yr old brother. And I remember standing there all excited and totally blown away. Oh sure the win was exciting. But I was totally blown away by the absolute silence in my neighborhood. The difference from living near Boston University during 2 Patriot's Super Bowl wins and living in the quiet 'burbs for the Red Sox first win in 86 years? Well, there were no screaming drunk college students. No one was turning over cars and setting them alight. There wasn't an orchestra of different car horns. It was total silence. It was creepy.

So tonight, I sit in Texas. My boys are once again totally asleep. And I am totally alone to stand in my living room with my hands over my mouth in TOTAL disbelief. I'm probably one of very few Texans that cares. So I ran up here to my computer to leave all sorts of "SOX RULE" messages on my Boston friends' MySpace sites. And to post my Boston pride - albeit a few years (or decades) late. 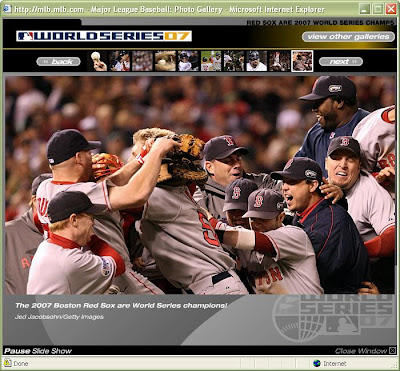 Too bad I didn't even know the world series was being played. I'm so out of touch, but so excited for you and the Red Sox!! he! Down here, it's all about the Cowboys on the news (which I don't even watch, but hubby gives me a nice recap!)
love you
k

rockies. ripped. my. heart. out.

Oh Jen! I thought of you during that whole run. I was hoping that maybe you were somehow a fan of some other team so you wouldn't care. I'm sorry!

Isn't it incredible?!!! I freely admit that I used to be a huge Red Sox fan until 1986. I couldn't take the heartache after that World Series. In 2004, though, I begrudgingly watched the playoffs and the World Series and I'm pretty sure I cried when they won. And, now, it's just amazing. Two World Series sweeps!!! And, I must say I was very proud in 2004 that R was born in that year. ;-)

The twins are my #1 team, but since moving here, rockies moved up to #2. *sigh* It's okay though, it would just be too wonderful for them to win the world series their first time around. But I do wish they had made a better showing than they did. Being shut out is a bit more than I can bear.

Yea Boston! I lived there once upon a time so when the Cards petered out (there's no better description for it) this year, my hopes turned to the Red Sox. They totally rocked! Plus, they have cute buns.

I was born in Boston...but I must confess, baseball just isn't my thing....sorry :(

but you are :)
xOx darlene