I was inspired by Angela's Halloween pictures from years past. I will dig out a few to share later. But I just came across this picture from 1968 and had to share it with you.

This is a shot of me and my brothers & sister on Halloween, 1968. I was three. I'm the sad clown. Big Sis is almost 5 and is the happy clown. Oldest Bro is almost 11 and is the ghost with glasses. Big Bro is 7 and is the...slapstick skeleton? I'm not sure. But there we are in all our finery. 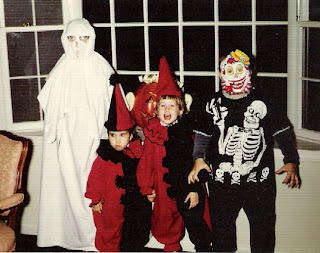 I have to tell you about that clown outfit I'm wearing. My mom made it for my brother Steve when he was about 2. So that would mean she made it around 1959. Each of us kids wore it when we were 2 or 3. Well, it was handed down to me last year when I inherited my mom's cedar chest - complete with lots of keepsakes.

So last year, the clown outfit just barely fit Lil' Bro. He was almost 3. He was very excited about the costume and couldn't wait to wear it. When we got it on and snapped in the back, he was still with me and having fun. But when I put that fluffy collar around his neck, that was it. He hated that. I had to snap this picture fast before he had a total meltdown. I didn't have time to torture him with the full hat (that has survived all these years, still stiff enough to stand up pointy!). But here is the 2006 version of that clown costume. And keep in mind this thing is almost 50 years old!!! 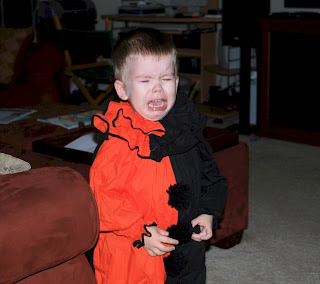 the traumatized look on his face - priceless!

These are GREAT pictures!! I love the history of the "traveling clown costume"!! My kids were so afraid of clowns when they were younger. I remember having to leave birthday parties once we found out the clown was coming.

You were a beautiful girl, as you are now, and I spotted you out immediately in that sibbling photo.

Happy Thursday and much love to you!!

It's the ruffles of TRAGEDY!

Great pictures! Thanks for sharing.

Oh what a priceless photo. Look at that face. Get that collar off now....!! My really old pictures are in a trunk at the back of a shed I can't get to right now...I would love to see some of our old pics.

The costumes that are handed down are the best! I don't know if you noticed Diandra was also the pumpkin after Rob. My nephew wore it also.

The clown outfit was adorable! How cute was that to see your son in it! Maybe his little one's will get to wear it too! Wow! Wouldn't that be neat?!!