I have a renewed regimen of walking. I've gained about 15 of my 25 divorce diet pounds back. Poo. I knew it would happen but I hate feeling this unhealthy. With the stress of work and the general yick that still hangs on with the whole divorce thing, being overweight ain't helpin' things much.

So last Thursday night, I took the boys walking in the wagon. Nothing better than walking with weights. So towing a 4 and 7 yr old must be good, right? And cheaper than buying those hand weights. And cuter.

Friday, I walked to their school with the wagon to pick them up. Lil' Bro was thrilled and all his classmates were impressed. Pokemon Boy was a bit apprehensive. I'm sure he was wondering what people would think. Let 'em think what they want. When I'm skinny and healthy, I'll be the one still laughing.

So tonight, we wagon'd out to the swings. A short walk for my taste but I have to keep my free walking weights happy. As I stood behind the boys pushing them (great arm workouts, by the way), I felt a bite. Yah. Some fire ant had decided to investigate my foot. As it got under the strap of my sandals, it didn't like getting squished and bit its disapproval. So I packed up the boys and we headed for the little tot lot near our house. I stuck to the sidewalks because it was watering time. I didn't want to get caught lugging a wagon over the grass as some sprinkler decided to start. The boys took a short cut up a hill. I was walking along looking at their cute figures standing on top of the hill, back lit with the setting son. I thought to myself, this is why we moved down here. Good stuff.

As I rounded the corner, both boys came barreling down the hill toward me, each claiming to have won the race. Suddenly, Pokemon Boy started hollering about ants being all over his legs. He had stood in one place the longest - probably right on top of a nest. Lil' Bro, being 4, had kept moving. I dropped the wagon handle and ran over to find little red beasties all over his sneakers socks and lower legs. ARGH! Have you ever tried to get those things off a kid? You have to just start brushing at them. And that pisses them off. I was brushing and slapping while he was freaking out and trying to hop away. I'm sure we entertained a few people from their windows.

It's one of those mommy moments where you suck it up, accept that you have to take some pain and just save your kid. I had to get him to stop hopping around, I had to undo his shoes and peel off his socks. And with each step of this process, I had to keep shoving him forward away from the little pile of ants we had just dumped on the sidewalk. Finally, I got his feat stripped of socks, shoes and ants. He has a bunch of welts in a little line around each leg starting just above the sock line. Poor thing. Amazingly, I didn't get bit on my hands during that whole thing.

I piled the socks & shoes in the wagon and made the boys head home. They went inside while I used a small hand broom to clean the remaining ants off of his socks, shoes and from in the wagon. Those are tenacious little buggers. I stomped every single one. Bite MY kid, will yah?!

So that was our big adventure tonight. I'd rather take those ants on than a bunch of wasps or bees. But Pokemon Boy will probably have some nasty scars from some of those welts. Although, he says they don't hurt all that bad. The few times I've been bitten, it burned like crazy and I got huge welts that lasted for weeks and then scarred. There went my foot modeling career! 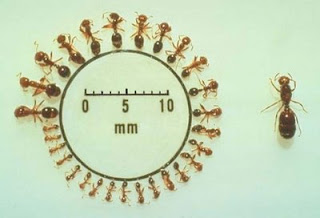 I don't know whether I should be a foot model or make an ant chart. This is reason #4057 why moms rock

Pokemon Boy is tough; I get very whiny with ant bites. Those thing HURT!! Yet another reason Ana should marry him; he's not a complainer.

Go, you, with your new walking regimen and wagon weights!

Fire ants are mean and nasty! What is the point of them anyway??

You go girl!!! I love the idea of incorporating the boys in to your routine. I've been struggling with the idea of hiking for a few hours with a group on Tuesday nights and having to leave the kids home alone. It's just one more downside of raising kids alone. But....I will get the hikes in somehow.

Last night, we were taking a walk after dinner and the fireflies were out in full force. I always find myself wondering what God had in mind when he created certain bugs/creatures. I mean, everything must have a purpose right? I think God should send those fire ants up the trouser legs of every ex-husband across this great nation :))

I am SO sorry! Ants are horrible! On Easter, Hannah thought it was a dirt pile and she threw several hand fulls into the air. The ants were ALL over here (her hair, her dress, her hose, her shoes...etc....It was awful! The bites lasted for a long time.

Eugh, fire ants. They freak me out. We don't get them here but I did have an "encounter" with a very similar species in Thailand.