Home again. How very odd to step from six days of the pick-up-and-go life style into the mommy world again. I got home about half an hour before Pokemon Boy got home from school. Opening the door to that smiling face just about burst my heart! When we picked up Lil' Bro from preschool, I thought I might get a running leap into my arms. But he stood up, looked at me and asked, "Mommy, why are you wearing THAT shirt?" Yes, good to see you, too, my love.

So I'm home, deep in the cradle of love. It's awesome. It could have been awesomer had future ex not insisted on discussing legalities while I was a captive audience in a moving vehicle. It was fun. I tried to exit said vehicle while it was still moving. There was screaming and yelling. Oh yes. Great fun. Quite the shift from the tender care I just endured from pretty much the whole of Boston. Good to be home.

But we're all good, future ex and I. God keeps my blood pressure from exploding my brain and I have a reminder to call my lawyer tomorrow. But we put away the hatchets and were able to speak civilly later in the day. Divorce really is a beautiful thing. And by beautiful, I mean giant mound of decaying flesh. 'Nuff said.

But let's see...when last we left our heroine, she was going to venture out and see about five different friends on her last full day in Boston. Yah. That was pretty ambitious. Especially considering I was moving about as fast as a chick who had just been sick for the better part of a week. After blogging to you good souls, I called friend number one: Tex, you up? You wanna hit breakfast? No? Too tired. Got it. That actually works for me so now I'm down to just juggling four people. Call to friend number two: Valdez, you wanna hit some lunch or something? What? Don't want to just hang for such a short time? Hit you next time I'm up. Good no problem. Down to three people to juggle. Friend number three: You just bought enough food to cook at home for two and you really need the couple time? Got it. No problem. 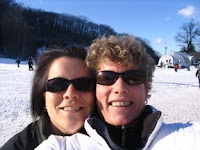 So I called my former roommate, KimmyJo. She was on her way out to western Mass when I informed her she was the lucky winner of a day out with ME. Fortunately, she is not insulted at being call number four. She turns around, drives about 25 minutes and picks me up. We drove out to a ski resort in western Mass that she wanted to check out. Mind you, I have never skied and will never ski in my whole life. So I found this picture rather humorous. You know, a shot of me after having just come off the slopes. 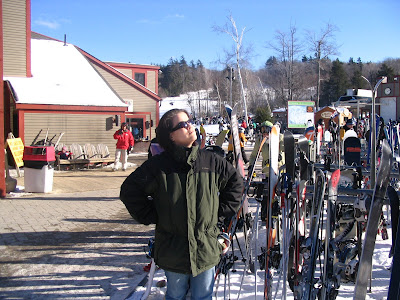 But it was so cool to see all that snow and all those people skiing or snowboarding.

KimmyJo has been yet another life line of mine since my college dropout days. She was my roommate when my birth-mom found me. She was my roommate when I was fired as an R.A. and kicked out of school for 2 weeks. She was at my wedding. She was one of the first at the hospital when Pokemon Boy was born. She adores my boys, my parents, Big Sis and The Tall Guy. She even still loves my future ex but wants to slap him upside the head. We have been there for each other and have waded through the mire together on several occasions. So we reconnected, filled in all the gaps in our respective stories. All in all, it was about a six hour excursion. On the way back to the city, she randomly called one of our other college buddies. So we unceremoniously dropped in on a very gracious Andrea and her family. We reconnected with her for about an hour and a half and it was just relaxed and familial. What a day.

KimmyJo got me back to the hotel in time to take one of my favorite friends out for a very fancy dinner. That crush I mentioned yesterday. He has been one of the few men I have confided in during this whole divorce thing. We've been friends since...let me do the math...well, for about 18 years, I guess. Something like that. So we went out for a killer steak dinner at this amazing place near my hotel. And we sat there talking forever. I put everything out on the table. I just felt like I needed to explain my beliefs, my feelings, my insecurities, apologize for a few of my actions, blah blah blah. The funny thing is, he already knew most of it - except for my beliefs. But it was just good to have to admit a lot of it to him. Get it all out in the open where we could poke at it or just leave it alone. He is an amazingly wise and gracious friend. And I only felt uncomfortable for about 5 minutes preceding my whole intro into it. As for explaining my beliefs, it was very cool. When I started into it, I didn't want to sound like some wimpy apologetic Jesus freak. I mean, even though I AM a Jesus freak, I'm not wimpy and I'm certainly not apologetic. But I sure can sound that way when I'm talking to people who know me and know the old me. So inside I said, ok God, you gotta do the talking here because I'll just make it all sound really stupid. So I just started telling him how I was around 2005, how I found that church in Cambridge through my cousin, how I went thinking it was all going to be stupid, how I went to that class and all the leaders seemed like preppies or Abercrombie & Fitch models or Lord & Taylor ladies or snooty writers that drop $7 words. And that I pegged all the people in the class as people I would NEVER have anything in common with. I explained how they showed me stuff in the bible, showed how it might have looked in their lives and then told me to try to figure it out in my own life. Nothing force-fed. No wagging fingers in my face. No judgement. I told him that even when I pressed them to spoon feed me some answers, they never did. I told him how God walked me through the cesspool of 2007 and never left my side. How it wasn't ME that was so strong last year but God. And how I love my church so much it freaks me out. It was just amazing how it all just came pouring out.

After I finished, I kind of thought he'd finish up his Australian lamb chops, wipe his lips, tell me it's been grand and leave rather quickly. In stead, we had a very engaging exchange about it. He asked questions that weren't humoring me. He asked questions that challenged. He gave his own opinions. I tried SO hard, Trish. You would have been proud. The old me would have just countered everything at every turn - given the polished answers I've heard my whole life. But in stead, I tried to remember how you, Paul, Marc & Gwen would let us all challenge and ask and discuss and mull things over and you would just keep pointing to God. Just gently answer with how things have happened in your own lives. It was a very cool talk. We talked for hours. Not just about that. But about just everything I wanted to talk about and then more. Very much back to our old friendship style. It rocked.

So I got to finish my visit with - truth be told - the guy I had planned the whole trip around anyway. And on a very good note.

And I'm back home and not pining. I actually miss everyone pretty equally. But I'm having fun posting pictures on MySpace and FaceBook and sending silly emails and messages.

Wow, what an interesting post. It sounds like the Holy Sprit was working overtime to let you be honest, truthful and yourself with your friend. These are good kinds of interchanges!!
Blessing on you my sweetie...and the picture of you with the ski's is darling!!
Hugs and Kisses
Wanda

And sounds like a really great dinner - I wish I had those talks.

Wait--we didn't teach you the wagging finger part??? And none of us, at any point, wagged a figure at you??

I'll make a note for your next visit :)

Can't wait to talk to you to hear about everything!